Showing posts from May, 2013
Show all

It's the 26th of May and that means only 5 more months until Cinderskella is released!! WAHOOO!! If you go back to this post, you might remember my promise to bring you a contest each and every month until my release date of October 26th, 2013!! So here I am again with another great giveaway! This month I have a pretty awesome prize, if I do say so myself. But first, let me tell you a bit about the creator. Stina creations is the coolest boutique in upstate New York! The owner, Christina, makes beautiful headbands and barrettes. She has some of the most unique products I've ever seen! But the best part is that she creates custom orders. All you have to do is contact her through Facebook, and she'll work with you on a one-of-a-kind hair accessory! That's just what I did for this month's prize! The headband we've created combines the best elements of Cinderskella.  In the book, Cindy wears a bow barrette.  So the headband has a cute bow.  But
7 comments
Read more

I'm over at The Mixed-Up Files today with Lauren Baratz-Logsted, co-author of The Sisters 8 series, which has sold over 200,000 copies! Can you guess who her co-author is?  Better hop on over to the Files to find out! Maybe you'd be interested to learn why this traditionally published author went indie for her latest project.  But you won't know unless you visit MUF ! http://www.fromthemixedupfiles.com/2013/05/ unique-situation-lauren-baratz-logsted/ While you're there, be sure to enter to win some books. There's four to be exact! So what are you waiting for? Head over to MUF now.  I'll race you there...and I'll even give you a headstart!
Post a Comment
Read more 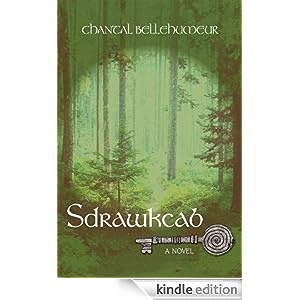 Chantal Bellehumeur is the co-author of Sdrawkcab.  I was so excited to learn that her twelve year old son, Aidan, is the other author! I just love parent-child writing teams!   Nothing interesting ever happens to Lina Lombardo. That is, until she meets Professor Alfonso and enters a magical universe with mermaids, angels, pixies, elves, dwarves, gnomes, leprechauns, unicorns, winged horses, talking animals, giant bugs, arachnids, oversized lizards, fire breathing dragons, trolls, goblins, ghouls, vampires, werewolves, ogres, and other so-called unreal creatures. The universe of Sdrawkcab , divided into a dark side and a bright side, is ruled by two queens: one evil and one good. The bright queen’s crown stones have been stolen to weaken her. The dark queen has hidden all twelve magical stones within her side of the universe and her most vicious creatures guard them. With the help of Professor Alfonso and some new friends, Lina embarks on a dangerous journey to find the magic s
1 comment
Read more

I'm over at The Mixed-Up Files today blogging about two great non-fiction books! These books feature jezebels, sirens, thieves, and villians. There's even a girl growing up in wartime America. Do I have your interest yet? Then come join the conversation!
Post a Comment
Read more

Dorine White, author of The Emerald Ring - a middle-grade adventure story - kicks off her blog tour today at From the Mixed-Up Files of Middle-Grade Authors! She's giving away a copy of her book, too! So stop on over to MUF for a fun interview and enter for your chance to win The Emerald Ring. http://www.fromthemixedupfiles.com/2013/05/emerald-ring-dorine-white/ Be sure to check out the other stops in the blog tour along the way! Week One •May 14 – Amie – From the Mixed-Up Files /  Heather – The Misadventures of a Twentysomething •May 15 – Kathy – I am a Reader •May 16 – Heather – Buried in Books (Review)/   Aeicha – Word Spelunking •May 17 – Heather – Buried in Books (Interview & Giveaway) •May 18 – Mel’s Shelves Week Two •May 20 – Bookworm Lisa / Shannon O’Donnell •May 21 – Sharon – Beck Valley Books •May 22 – Natalie – Literary Rambles   /  Books and Other Creative Adventures •May 23 – Jennifer – Makobi Scribe   /  Carrie – Wandering with Wonderwegian •May
Post a Comment
Read more

I'm not saying we shouldn't appreciate teachers. We absolutely should. I appreciate every single one of my childrens' teachers. Well, everyone except my daughter's third grade teacher who told me at my very first parent-teacher conference, "I HATE your daughter." There's a special place in hell for that woman. And you can bet what I did shortly after that conference--I withdrew my daughter from public school and homeschooled her. It wasn't without attempts to remedy the problem first, of course, but they weren't met with the most pleasant of responses. I couldn't let my daughter continue to rot and fester in that teacher's class, with her desk squeezed in a corner, back turned to the other students, completely isolated from her peers like some sort of dunce. But that's a story for another day... Most teachers are pleasant people who love children, love teaching and probably love learning in their spare time. They sacrific
2 comments
Read more

I'm over at From the Mixed-Up Files...of Middle-Grade Authors today where I interviewed three amazing people! It's a fun post with The Chronicles of Egg author Geoff Rodkey (who also happens to be an Emmy-nominated screenwriter for the films Daddy Daycare and RV), his agent, Josh Getzler of HSG literary agency and Jennifer Besser, Publisher at G.P. Putnam! If you want some insider information on the industry, a chance to win two great books or a query letter critique, then head over to MUF right now! (http://www.fromthemixedupfiles.com/2013/05/chronicles-egg-geoff-josh-jen/)
Post a Comment
Read more

A Story of Lyme Told in Haiku

Ticks feed for their life. Spirochete burrow tissue; searing pain throughout. Lyme disease adhered. Muscles, joints and brain refuse to work. It's the end. Doctors won't help you. But it's not all in your head. Crippled body; truth. Money, pills, money. Pain, suffering, endurance; Missed out on so much. Days without an end. Guilt, sorrow, fear, rejection, Because of a tick. Loved ones, holding close. Courage and light in darkness; Bacteria dies. Ticks kill without care. I will smash them with bare hands; No more Lyme on Earth.
Post a Comment
Read more

When I wrote Cinderskella with my daughter, I thought it was great fun. I also realized how lonely it was writing as a team, never really fitting in to any one mold. Most agents weren't interested in signing a child author and I began to feel as though there was no place in the book industry for mother-daughter writing teams (especially ones with very young daughters, as mine was 9 at the time). Sometimes I felt like giving up.  I couldn't follow the path that so many others had walked.  Even though I wanted to, it seemed hopeless because the industry was so tough for child authors.  An agent once told me to remove my daughters name from the manuscript because "agents look at that as a fun hobby, not as something serious."  As well-intending as that agent was, it never felt right to abandon my daughter and a project we loved so much.  Furthermore, I couldn't betray her trust. What I needed to realize - and did after quite some time - is that not all paths to
Post a Comment
Read more
More posts